Lately if I do not write something down right away, the thoughts fly outta my head.  Good thing there are always more thoughts waiting in the wings.  This post will likely be a hodgepodge of random rambling musings.

Today Lulu and I went out and about to spend some time together before she goes back to school later this month.  August already? WTH.

First stop was Tommy’s Mexican restaurant for breakfast.  We call it Tommy’s tacos but they offer so much more.  Three Tommy’s are all around town.  We went to the one closest to home.  Imagine our surprise when we found they moved.  Same street – San Pedro just on the corner of Basse and San Pedro not further down on Montan and San Pedro.  And you’re bored.  Directions, she is giving us lay of the land for some place we’ve never been and won’t ever go.

This is our place!  Our Cheers!  But different.  That’s traumatic.  Light trauma but still.  Why’d you have to go and do that.  Can’t she stay little.  Uh wait!  I am projecting!

Tommy’s the restaurant grew up … doubled in size BUT still serves the same delicious food.  Papas con huevos on maize.  With the BEST coffee on the planet. Special day allowed me to splurge and drink coffee again for first time in a while.

Second stop was Old Navy.  I stocked up y’all with four pair of pants that fit.  You know since my current pants shrunk!  Wink Wink. They are the exact same style but different colors.  I almost got five for something new each workday but Friday is my jeans and wear red day.   I also got three shirts, two dresses, and a headband  With no tax and a discount for breaking down to get their credit card, I saved $100 smack-a-roos.

Truly.  But they changed too.  The store next to them closed and Quarry Nails expanded.  Always packed but now?  Oh my!  I told myself … SELF no more Mani-pedis for the remainder of your life.  Your hubby is self employed and the cost is not warranted.  Such a wasted indulgence.  BUT Lulu wanted to go and we used to do this stuff a lot before the big awful.  Doing so again kind of makes up for things.  Kinda. And besides it feels fan-freaking-tastic.   Nails done with massage and drinks!  Vodka for post-breakfast, pre-lunch.  Okay not vodka but you get the drift.

After that we quickly perused Nordstrom Rack and Chicos before heading home WHERE  I took everything out of my closet.  Put back only what I can fit into.  And fit or not, if I had not worn an item in forever, out it went.  I have six bags to donate.  Shoes were included in the purge.

Inspired by my fellow Texan by way of somewhere else maybe?  I need to ask John where he originally hails from one of these days.  I could not find any video of the entire “Where oh where” song.  Those lyrics may be lost forever.

The little dog song as we called it growing up was sometimes coupled with “How Much is that Doggie in the Window” when we broke out the 45s to take a listen.

Reading John’s post reminded me of something from earlier today.  I may not be able to remember all the lyrics of days past but I can retain most of my earlier in the day memories.  Anyhow, Lulu and I were out gallivanting around this tax-free weekend.  Amidst our high-jinx, somehow songs of my youth came up … songs like the one above.  But not that specific song.  Any song we knew by heart.

Our main discussion yet again centered around physical beauty.  You see we had just gotten Mani-pedi’s.  The  pure spa luxury we go through!  I mentioned how my hands really show my age and make me look ninety!

Lulu tells me not to say things like that.  And that even 90 year old hands are beautiful.  And like that “Everything is Beautiful” by Ray Stevens popped into my head. 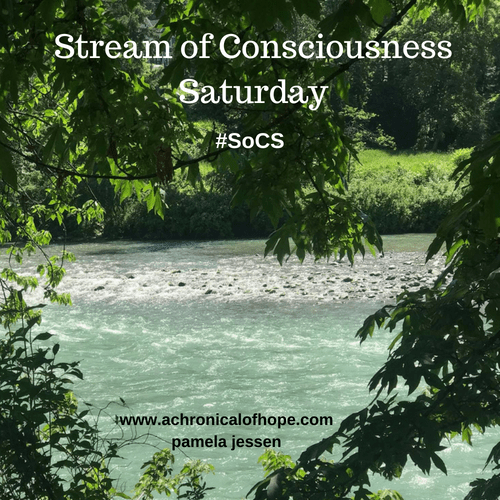 “As if!” says Cher in Clueless

If you do something to be sorry about you apologize.  Simple! Didn’t your mama raise you right?

Doh! Jilly is on a tear this morning y’all.

Where in the world is this coming from and what’s Doctor Zhivago got to do with the price of tea in Russia?  Get it?  Cuz Dr. Z was set in Russia.  Ha!  I slay me.  LOL 🙂

“At the beginning” says the King.  Keep going until the end or some such other stuff.

I’m paraphrasing because I can never remember this Lewis Carroll quote verbatim.  I LOVE the sing song of the words though.  Just won’t stick in the old noggin. “Off with her head”

Finally!  We are at the reason why we are here today.  Where #SoCS is in da house.  Where the lovely Linda gives us our prompt.  Where she writes and I repeat:

Your Friday prompt for Stream of Consciousness Saturday is “where.” Start your post with the word “where” and write whatever comes to you. Bonus points if you end your post with “where” too. Enjoy!

To join these rebel rousing band of merry delightful prompt respondents,  follow the rules and ping back.

I win!  Bonus.  Or not since the only way to end this post with where is to awkwardly stick where … where the sun don’t shine.  LOL 🙂

Bad News Bears.  You can take your 2nd place trophy and shove it up your @$$!!! you miscreants.  I love these kids!

Too bad the bonus points weren’t awarded for nonsense and over use of the word where.