as in Alice in Wonderland

Alice in Wonderland has always fascinated me. From the book Alice’s Adventures in Wonderland by Lewis Carroll, to the 1967 song White Rabbit by Jefferson Airplane, to the 2016 Through the Looking Glass movie starring the ludicrous Johnny Depp as the Mad Hatter, I was drawn into the myth. I realize I do not know Johnny Depp in “real” as opposed to fake life but in my opinion he is as out there as the characters he typically plays. Judge much J-Dub? Well yes, sometimes I do but this post is not about my bias.

Let’s go back to Alice.

I have been to NYC four glorious times and each time I went to Central Park and each time the Alice in Wonderland statue was our first stop! 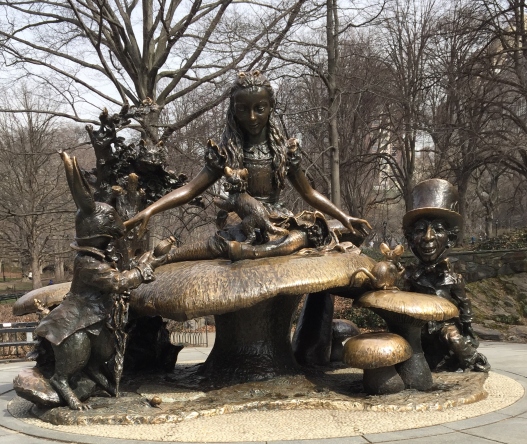 My senior year of high school, I was the Alice understudy in our Spring Production. I was able to perform two of the six performances as a consolation. I did not have to wait for the “real” Alice to be sick. This understudy aka J-Mc (pre J-Dub) got stage time.

I remember the audition, getting up there to read the lines I was given. Of course all the girls wanted to be Alice but not me. You see I never wanted to be the lead.  Instead, I wanted my own small part … the White Rabbit, the Mad Hatter, Cheshire Cat, Mock Turtle, the Queen of Hearts, Twiddle Dee or Twiddle Dum. There are no small parts, only small actors ~ Constantin Stanislavski

I did very well in the first of my two performances or so Sister told me on the van ride back to the school afterwards. However, the second time I got caught in my head and bombed. I remember this like it was yesterday and not 35 years ago. I still want a do over. Picture it! My best Marlon Brando. I could’ve been a contender. Stella!!!!!!!!!!!!!! Wait wrong Brando but you get the drift.

Anyway, that’s all I got for A.

This post was written as part of Blogging from A to Z April (2018) Challenge.