Over the course of the next few blogs, in a somewhat chronological order, I will write to expel my feelings on virtual paper.  J-Dub’s: A series of unfortunate events (I borrowed loosely from Lemony Snickets – just a play in the name). In my Act 2.0, I am writing to fill my time.  Empty nest is now 8 days away.  When possible I will inject humor and add a positive point of view but in some cases, life is just dark. Read on with caution.

I was in second grade.  It was winter and very cold.  Not sure what month; assuming after the holidays though because school was back in session … maybe January or February??  I was dropped at school like normal.  The day proceeded pretty much like normal.  We were using flashcards and each parent had made some and sent them in.  Someone mentioned the ones my mom had made smelled like smoke.  That was embarrassing; my feelings were hurt but daddy’s words were always the same “no harm done, it could have been worse”.  The words … hurtful then helpful … stayed with me, to this day.  Some 44 years later.

We were released to recess and went outside despite the weather.  Cold was not rain and this was in the 70s where exercise was part of the school day.  Sometime during recess, my teacher Mrs. Betty Klar, asked me how I was doing?, if I needed anything? that she was so sorry and she hugged me wrapping me inside her big winter coat.  I remember the coat in particular, bluish/purple faux fur.  Very stylish!  I remember how warm I felt compared to the cold playground and I remember feeling special.  What I didn’t know though was why she was so sorry.  That was odd.

We rode home from school with a neighbor and first thing I noticed when I got home was that my mom was not there.  I learned she had been admitted to the hospital for a mastectomy.  I was not told exactly that way I am sure.  Exact details are foggy.  There was not much technology beyond the rotary dial phone and I remember we called her in her hospital room later that evening.  I remember her telling me to go to the little travel suitcase in her room.  She had treats in there for us … for me my favorite Reese peanut butter cups.  To this day, that candy can make all my cares go away.  I still have her suitcase too and it goes on every vacation with us. 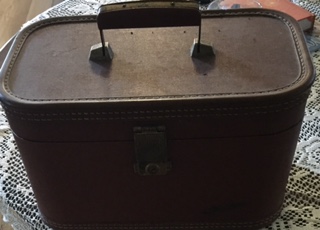 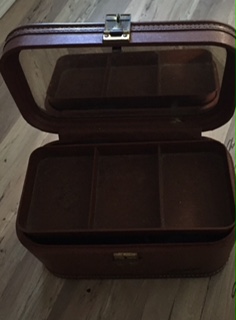 Much of the remainder is a blur … she came home with drain tubes.  and if I hugged her, I thought she would break.  She didn’t want me to be afraid so she talked about everything that happened after it happened.  Aunt Jo told her “Teresee, I don’t know about you and Louie but we tell our kids everything.  They’re going to find out anyways so best be from you and not someone speaking for you”.  Mom had a second surgery a few years after, on the remaining breast.  I vaguely remember her saying she’d rather die … so a lumpectomy was all she agreed to that time.  Back then, the surgeries were very invasive.  The swelling in her arm, where the lymph nodes were removed never went away.  Cobalt treatment and radiation vs. chemo.  Reconstruction was not an option.  There are many improvements since the 70s and my hope is that there will be a cure one day.

Years later I found out that she had been diagnosed a full year prior to the surgery but the doctor wanted to ‘watch’ the tumor – even without a biopsy which today would make no sense.  One doesn’t question authority, this was before the time of “being your own health care advocate”  This was before Web MD.  Instead one followed doctor’s orders and PRAYED.  The biggest contributing factor was smoking (see paragraph 4 above) over age 35 while taking birth control pills.  Another “best tell them or they’ll hear it from someone else” and this was my aunt telling me the night of our rehearsal dinner to take my bcp’s unless Billy Bob and I wanted 3 kids in 3 years like my cousin Barbara Ann.  And stressing to me, do NOT smoke or what happened to your mom could happen to you.  Me asking what are you talking about and her telling me. “Forgive me Father for I have sinned”

Mom eventually hosted survivors group sessions where others in various stages of cancer treatment would come to our house.  It was summer time and I remember on those days we were banned from the living room (one of two rooms in the house with an air-conditioner) while the group talked.  She didn’t host those meetings for long, just something she needed to do at the time.  And while cancer eventually killed her, it was a different cancer, the breast cancer she beat.

And what does all this have to do with anything?!?  Nothing really, just musings and rambling … wondering how experiences affected me turning me into who I am today.

As always … more to come.